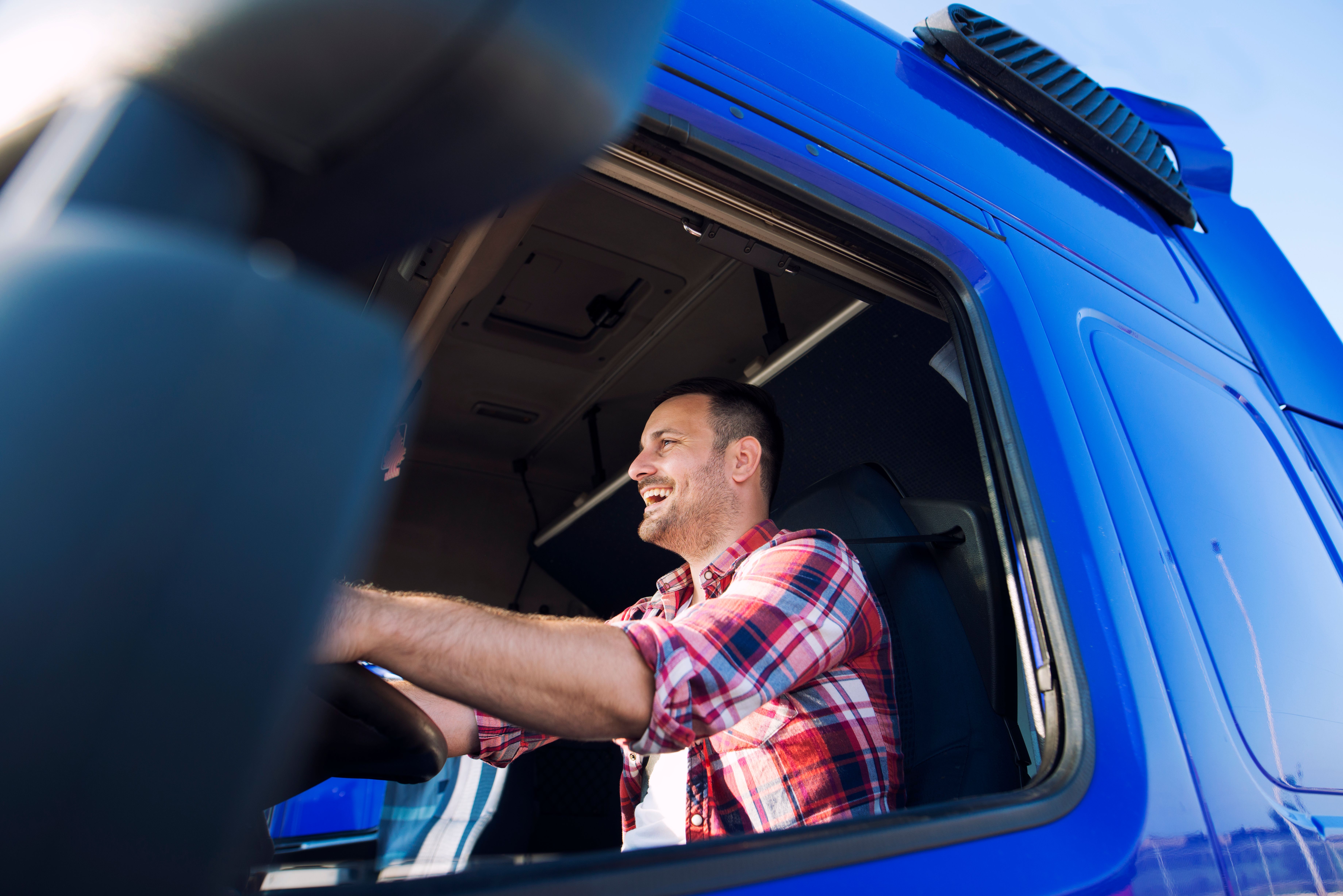 During this unprecedented year, the nation turned its focus to those on the front lines of the fight, including medical personnel, first responders, grocery store workers and truck drivers. The contributions of truck drivers in particular — especially their role in delivering essential supplies to hospitals, supermarkets and elsewhere — gained praise. In communities nationwide, residents posted signs thanking drivers who kept the economy moving amid the stark financial downturn.

In April, President Donald Trump recognized commercial drivers during a ceremony at the White House. “American truckers are the foot soldiers who are really carrying us to victory,” Trump said. “They’ve done an incredible job.”

Joining him were the Secretary of Transportation, Elaine Chao, and the president of American Trucking Associations, Chris Spear.

“We obviously have an industry filled with some of the hardest-working, patriotic people in the U.S.,” Spear told Transport Topics after the ceremony. “Those drivers are moms, dads. They’re husbands, wives. They’re involved in their communities. They’re very charitable. They are the essence of the American spirit and to see it recognized like this in a time of crisis — I have to say — I think that is really an extraordinarily important thing for the leader of our country to do.”

At the centers of government, legislators and regulators worked to assist the nation’s response to the pandemic. They advanced emergency aid measures and passed regulatory relief to assist the freight industry’s ability to respond.

In Congress, policymakers approved multibillion dollar packages before agreeing to a colossal multitrillion dollar aid measure. This $2 trillion legislation advanced in the spring and contained more than $30 billion in transportation relief. That included $25 billion for passenger airlines and $4 billion for cargo airlines.

More recently, ATA called on congressional leaders to safeguard motor carriers against increased liability risk tied to the virus. As Congress negotiated a new round of aid in December, ATA’s Spear said: “The trucking industry is proud to play an outsized role in COVID-19 response and recovery efforts, and we ask that you consider the essential nature of the trucking industry as you consider the inclusion of reasonable liability protections in any future legislation.”

One lawmaker who has been an ally for trucking is returning to Congress after the fall elections. Maine Republican Sen. Susan Collins, an incumbent transportation funding leader, earned a fifth term to Capitol Hill after a tough challenge.

In the House of Representatives, Republicans gained seats but Democrats retained leadership, thus ensuring a return of chairmanships for transportation panels. Control of the Senate is linked to the outcome of two Georgia Senate runoffs in January. A win of at least one of the Georgia Senate seats would give Republicans the majority.

On the presidential stage, President-elect Joe Biden’s “Build Back Better” infrastructure proposal brings with it the promise of improving access to commercial corridors. While that was a goal shared by President Donald Trump, Biden arrives at a time when negotiations between the congressional and executive branches over infrastructure funding policy, combined with the on-again, off-again reauthorization efforts of the country’s highway law, have dragged on. Both points anchored national transportation interest, with nearly the complete transportation community urging policymakers to facilitate greater investments across mobility grids. Negotiations are expected to carry over into 2021.

During the year, regulators issued a host of waivers, exemptions and declarations aimed at facilitating the work of truckers.

Regulatory certainty on updated hours-of-service regulations did arrive, however, when in May Transportation Secretary Elaine Chao and former Federal Motor Carrier Safety Administration acting administrator Jim Mullen announced the long-awaited final rule on a slate of proposed changes that granted more flexibility to truck drivers. Many in trucking praised the four revisions that were approved, which included measures associated with the 30-minute rest break and sleeper berth time. Several safety advocates objected to the rule, however, and have pursued legal action.

The final rule arrived after more than a year of agency deliberations, which were made following consideration of thousands of public comments. The new rule is based on a proposed rulemaking announced in August 2019.

“That’s pretty fast for government rulemaking standards,” Dan Horvath, ATA’s vice president of safety policy, told TT. “It didn’t stall. It wasn’t put on a desk somewhere and sat and wait. To see that emerge in the middle of a pandemic speaks a lot to the effort to get that done.”

In August, FMCSA announced that Mullen would be leaving his post after less than one year. Wiley Deck, then a senior policy adviser within DOT’s Office of the Secretary, assumed the role of FMCSA’s deputy administrator. In September, automated technology developer TuSimple announced Mullen had taken a position as its chief legal and risk officer.

During the year, the FMCSA’s crash preventability program was amended to permit crashes where drivers were not at fault to be omitted from their safety profile. The agency also began a military pilot program for younger drivers, and launched its long-awaited Drug and Alcohol Clearinghouse database. The system logged more than 46,000 drug violations in the first year of operation.

In addition, as FMCSA’s Compliance, Safety, Accountability program turned 10 years old, a study of a potential new rating program, known as the Item Response Theory, was still underway — despite promises by FMCSA to make a decision on whether to incorporate the very complex system that could be used to rate motor carrier safety.

At the state level, many transportation-related concerns stemmed from consequences of COVID-19. While truckers’ steady consumption of diesel fuel helped stabilize revenue for state departments of transportation, across the states fuel tax revenue dropped sharply. As states instituted stay-at-home orders in hopes of diminishing the impact of the pandemic, a sharp drop in traffic from commuters and vacationers cratered revenue. Maine and New Jersey have passed legislation to boost transportation revenue, but the financial outlook across the board looks bleak. The American Association of State Highway and Transportation Officials estimates a loss of $16 billion for state departments of transportation in fiscal 2020.

On the West Coast, the California Air Resources Board approved a rule that will require manufacturers, beginning in 2024, to sell a certain percentage of electric heavy trucks, and it gave the go-ahead to drastically reducing oxides of nitrogen emissions in the state. Also, California’s Assembly Bill 5, which threatens the use of independent contractors by motor carriers, was set to go into effect at the beginning of the year but is hung up in the 9th U.S. Circuit Court of Appeals in connection with a challenge to the law by the California Trucking Association.

A federal appellate court in 2020 overturned the diesel fuel fraud convictions of former Pilot Flying J President Mark Hazelwood and two ex-Pilot sales executives on the grounds that a lower federal court permitted use of evidence that should not have been admitted. Also, last year, the U.S. Securities and Exchange Commission’s yearslong civil court fight with Daniel Ustian ended with the former Navistar International CEO agreeing to a $500,000 civil penalty and a permanent ban from serving as an officer or director of a public company.

Among broad industry challenges, a report showed that the parking shortage for truckers remains a serious problem and insurance rates for motor carriers continued to increase.

The rising tide of jury awards against truckers drew ATA’s attention, and attempts to mitigate these “nuclear verdicts” got underway in several state legislatures, including victories in Louisiana, Missouri and Iowa. In a related development, in New Orleans by year’s end 33 individuals had been indicted in a scheme to stage more than 100 accidents with trucks, intending to fraudulently seek damages in the courts for accidents in which truckers were not at fault.